Now that 2013 has officially come to an end, I feel it is safe to share the photos taken by talented photojournalists around the world that have stuck in my mind.

Whether because they were a historic moment, sent a powerful message, helped us see the world and ourselves in a new way, or just for their beauty, they have stayed with me.

Some of them you will have already seen, some I have shared on this blog before but here they are. 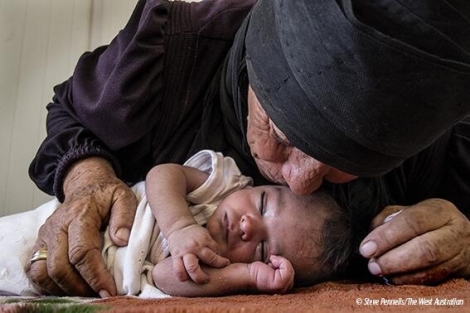 1 in 5 people fleeing Syria now are younger than 4. This baby was only 10 days old when smuggled across the border. (By Steve Pennells/The West Australian) 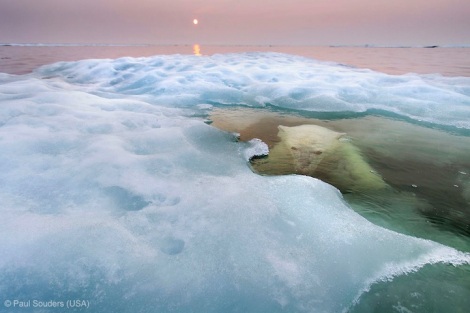 Wildlife Photographer of the Year competition: Animals in their Environment – Winner, Paul Souders (USA) for ‘The Water Bear’. Photography is wonderful as it captures moments we have never seen, and may not get to see again.

Ukrainian and EU flags fly over newly-erected barricades, Independence Square, Kiev. This is how I imagine the streets, before the storming of the Bastille, to have looked. (S.Ponomarev/NYT/ Redux) 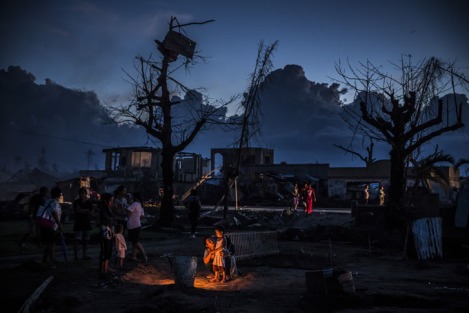 Like a movie scene, a family gathers around a grave, in Leyte, Philippines, of a relative killed when Typhoon Haiyan struck their home. People wandering seemingly lost in destruction, trying to grieve for people, a community, and life lost. (By Dan Kitwood/Getty Images) 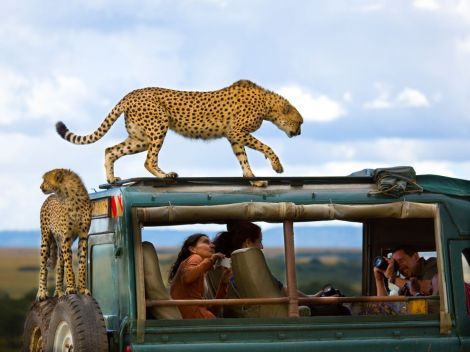 Cheetahs, who jumped on a safari vehicle to get a better view of the gazelle they were hunting in Kenya’s Masai Mara reserve. The way one casually looks in the distance, the other tiptoes on the roofs, and the humans can’t believe what they are seeing. This image is excellent. The picture won third prize in National Geographic’s 2013 Traveller Photo Contest. (By Yanai Bonneh)

Lisa Cox of the Canberra Times described it as, ‘The photo that captured the connection between a 12-year-old girl with Down syndrome and a prime minister’. Sophie Deane photographed a smiling PM Gillard on the day the state of Victoria agreed to sign up to the national disability insurance. The portrait hangs at Old Parliament House’s Museum of Australian Democracy. In my opinion, it is the best news photograph ever taken of Julia Gillard. (By Sophie Deane/Freelance photographer)

An Egyptian woman in Cairo tries to stop a bulldozer from hurting a wounded youth. There is debate if this is a military or state security bulldozer, but either way, it reminded many of that famous photo in Tiananmen Square in China. For me it sums up a city destroyed, civilians wounded, and the able-bodied doing whatever they could to help those they could. (By AFP/Getty)

Of this photo, the photographer Taslima Akhter told TIME magazine: “Around 2am, I found a couple embracing each other in the rubble. I felt like I knew them. Every time I look back to this photo, I feel uncomfortable. It haunts me. It’s as if they are saying, we are not a number, not only cheap labour and cheap lives. We are human beings like you'”. Taken in Savar, near Dhaka, Bangladesh.

Tribesmen lead their camels through the sand dunes of the Liwa desert in the United Arab Emirates. Not only can you see the beautiful light, you can feel the peace. (By Karim Sahib/AFP/Getty) 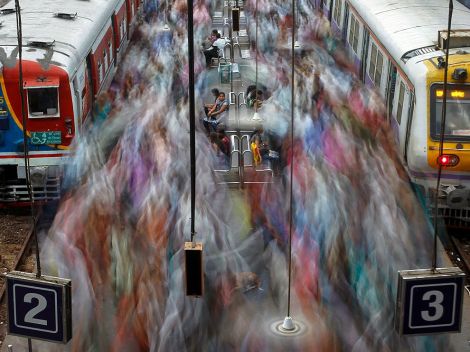 Mumbai Train Station — the stillness in the colour, movement, chaos. (By Vivek Prakash/Reuters).

C-boy the lion, in the series, “The Short Happy Life of the Serengeti Lion”. As Kathy Moran, Senior Editor, Natural History for National Geographic put so well, “By photographing C-boy in infrared black and white, without intrusive flash, Nick made the most naturalistic images ever of nocturnal lions. His photographs revealed lions as we rarely get to see them—in the dark, attuned to everything happening around them, in their element. When you look at C-boy, you know that you are playing in his world”. (By Nick Nichols/National Geographic)

The scale of the sprawling Zaatari refugee camp in Jordan can only begin to be understood from above. On 31 December, the population of the camp was more than 124,000. There are almost 2.3 million Syrian refugees registered with the United Nations while their country deals with a civil war. (By Mandel Ngan/AFP/Getty) 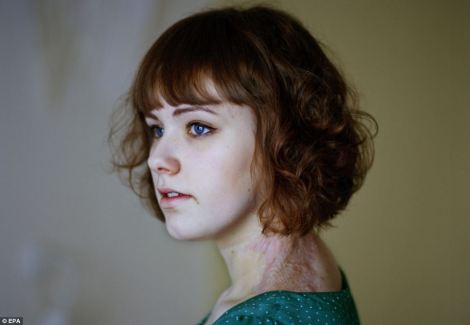 From a series of Utoya island massacre survivors: Ylva Schwenke, 15, from Troms. ‘I bear my scars with dignity, because I got them standing for something I believe in’. Shot in the shoulder, stomach and both of thighs. (By Andrea Gjestvang/EPA)

There is something incredibly grotesque about this photo, and it is difficult to look away. The proud, beaming smile, as she clutches weapons. And there are plenty more zebras, bears and alligators where this one came from. Michele Bachman and lion, South Africa (Photographer unknown). 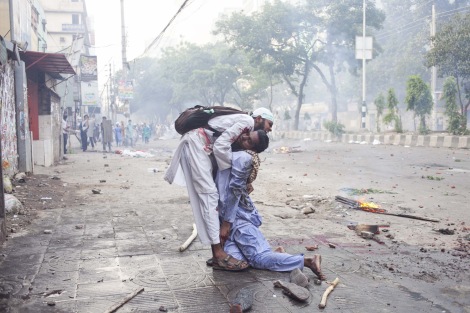 An activist tries to take another severely injured activist to the hospital, Dhaka, Bangladesh. Two people who have been fighting for what they believe in, then one has to fight for one seemingly fighting for his life. There is an intimacy and rawness here that is rarely captured. (By Atish Saha/Demotix/Corbis) 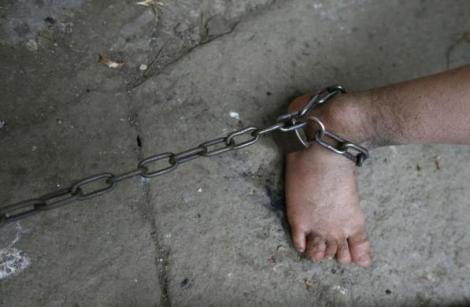 A child in chains — The chains around the ankle of eleven-year-old He Zili is seen in his home in Zhejiang province, China. The boy injured his head when he was a year old and started suffering from mental disorders. According to his family, they had no choice but to restrain him on chains as he had a tendency to attack those around him. Zili is currently being looked after by his physically disabled grandfather and his intellectually handicapped father after his mother died of cancer. (by William Hong/Reuters)

Once a midwife, she now sleeps rough in Delhi. (Photographer unknown via BBC News website).

Lake Natron in northern Tanzania turns birds and animals to stone. Temperatures in the lake can reach up to 60°C/140°F and the water has an extremely high soda and salt content which causes “the creatures to calcify, perfectly preserved, as they dry.” (By Nick Brandt)

The Holmes family — grandparents and five grandchildren — who waded into the sea near Dunalley, Tasmania, to shelter from the fire under a jetty. This photo was taken so send to the children’s mother so she knew they were ok (By Tim Holmes) 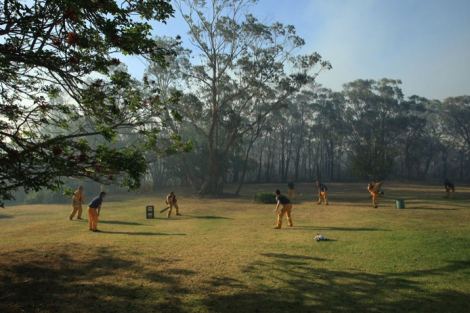 Survivors of Super Typhoon Haiyan march during a religious procession in Tolosa on the eastern Philippine island of Leyte. Of all of the photos I have seen this year, the woman in the foreground’s face is one I have not been able to forget. I always recall the image with the breeze in her hair, the greyness, and the cross carried in the background. What she must be thinking. (By Philippe Lopez/AFP/Getty Images)