At the time of writing this post, the war in Afghanistan has been going for 11 years, 9 months, 3 weeks and 5 days.

Imagine how many children there have grown up only knowing war?

Below are selected photographs — just some of the brilliant work by photojournalists — from the collection published in The Atlantic this week (warning, many are beautiful, but many are upsetting).

Mahfouz Bahbah, 12, stands on a roadside hoping to sell his balloons during sunset in Kabul, on October 18, 2011. (AP Photo/Muhammed Muheisen) 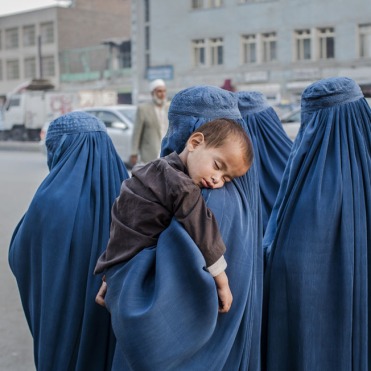 A young boy sleeps on a woman’s shoulder in the Old City on November 7, 2012 in Kabul. (Daniel Berehulak/Getty Images)

Afghan children play in a street in Herat, on January 14, 2013. (Aref Karimi/AFP/Getty Images)

Two young girls play house, mimicking their mothers in burqas cut to their size, on the outskirts of Jalalabad, east of Kabul, on March 17, 2013. (AP Photo/Rahmat Gul)

Afghan children run to school on September 24, 2012, in a village on the road to Naghlu, near the French army base. (Jeff Pachoud/AFP/Getty Images)

Afghan children, near the town of Kunjak in southern Afghanistan’s Helmand province, on October 24, 2010. (Reuters/Finbarr O’Reilly)

An Afghan boy wearing a t-shirt depicting U.S. President Barack Obama peeks from the doorway of his home in an old neighborhood of Kabul, on July 23, 2013. (AP Photo/Ahmad Jamshid)

12-year-old Tarana Akbari cries out near dead and injured people after a suicide bomber killed more than 70 civilians during a religious ceremony at the Abul Fazel shrine in the center of Kabul, where Shia Muslims were marking the Day of Ashura, on December 6, 2011. Agence France-Presse photographer Massoud Hossaini won the agency’s first Pulitzer Prize for the picture on April 16, 2012 in the breaking news photography category “for his heartbreaking image of a girl crying in fear after a suicide bomber’s attack at a crowded shrine in Kabul.” (Massoud Hossaini/AFP/Getty Images)