Some of the most famous tourist landmarks of New York are the New York Stock Exchange, the bronze ‘Charging Bull’ sculpture by Arturo Di Modica, Wall Street, and Tiffany’s. Yet until today, I hadn’t seen any of them.

A few quick things I was taught on the tour, and photos below, from what was a ‘glorious summer day’ as they say:

View across to Statue of Liberty.

Freedom Tower in the distance.

On the left, ‘wedding cake’ style of architecture common in Manhattan (gradually smaller width the higher the building goes).

George Washington statue out the front of the building that was where congress sat before Washington DC existed.

Memorial for all people who fought for the US, who are resting at the bottom of the Atlantic Ocean. Opened by President Kennedy.

Living memorial garden for the British citizens who died in 9/11.

Names of those who are resting at the bottom of the Atlantic Ocean.

Tourist out the front of the National Museum of the American Indian. In the background is a statue representing the continent of ‘Africa’. Four continents are represented by statues, but not Australia, as it wasn’t considered a continent at the time. 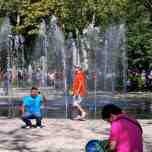 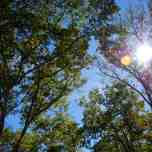 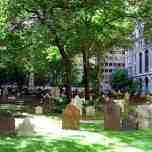 Fraunces Tavern — where rebels used to meet, and Washington said farewell to his troops after the British had departed at the end of the war. 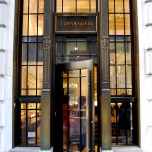 Tiffany & Co. (Funnily, not mentioned by tour guide, we only stopped as Trump Building, 40 Wall Street, across street and had stories to tell).

At the bottom of Broadway. 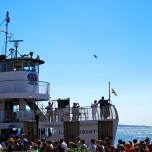 Blimp in the sky, and a ferry tour about to depart to visit the Statue of Liberty.

Sydney — crests of all destinations for this shipping company on exterior of building.

St Paul’s churchyard — visitors gather around the Bell of Hope, which hangs above a map of the World Trade Centre site, and is only rung on September 11.

You can read more about the Lower Manhattan Walking Tour that I went on to see these sites at the ‘Free Tours by Foot’ website.