My notes from the opening presentation by Richard Torrenzano at the International Association of Business Communicators (IABC) World Conference, Hilton Hotel, New York City. Not all insights are mine.

Cyber attacks aren’t just about stealing data from companies. They affect reputation, and brands, like Domino’s Pizza found, and disrupt customers, as South Korean banks found just this year. We can all think of a company near and far, reported in the media, that has had to deal with a hacking incident, or a revealing or scandalous video that has gone viral.

Richard Torrenzano was the host of the ‘Digital Assassination’ session on the Monday morning of the IABC conference. He should know a bit about the topic of cyber reputation attacks, as he’s written a book called just that. Richard started off by mentioning that:

There are some big trends emerging in the world of digital assassination. Hacking is now democratised — anyone can do it — the ‘techspert’, the teenager, the average person with a computer. The conflation of crime and ideology is increasing, for example Wikileaks, Snowden, and one person’s traitor is another’s hero. Finally, there is digital combat marketing on the increase e.g. a smear campaign where corporate leaders are said to be peadophiles, and female executives and the wives of some leaders advertised as prostitutes with home numbers listed (this is a real example).

In Richard’s view, a company has just eight hours to deal with a digital disaster: six hours to pull the team together, and just two hours to respond. Here are some things to keep in mind:

PUTTING THE EXPERTS TO THE TEST 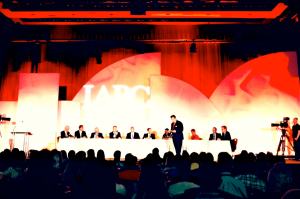 Richard arranged a great panel of business and media experts to play different roles in a mock-crisis. The hypothetical digital saga was a photo of a woman posted online, who had used a cosmetic product that was claimed to have given her cancer. The image of her swollen and red face had gone viral. The panel was challenged with playing the role of the cosmetic company, and each participant represented a role that should be immediately involved at the time of a digital crisis. The roles and panelists were:

(Note: Interestingly, chief of human resources was wasn’t explicitly stated but I think this role is really is important – company staff are key customers and powerful messengers and need to know what is going on).

What would some of them do?

The Chairperson: ‘Get on the phone and talk to people the old-fashioned way. Talk to your board – there shouldn’t be anyone on the board that can’t be trusted and relied on to help’. The Chairperson made an interesting comment, which was ‘worry about legal later’ – as legal, can be dealt with later (that is what it is also designed for – prevention and cure). Everyone must be ‘armed’ with the same message, including analysts, accountants, and large investors, staff before they read it in the paper. This helps to ensure ‘any statement to the media is regarded as the truth’. If the press release says one thing, but the staff are saying something else, it is messy and lacks credibility.

Head of Communications: Something that surprised the audience, was that the person representing the role of Head of Communications said they would spend time ‘marshalling the facts then preparing a two-pager for media’ explaining the integrity of company systems. This got quite a laugh from the hundreds in the audience who knew full well that in the time a two-pager can be written, a tweet can be ‘retweeted’ hundreds of not thousands of times, a Facebook post can be live, and memes, videos can be posted far and wide. Waiting for the facts are important; but so is containing the outbreak, and both must happen at once.

The Lawyer: Have team ‘monitoring all channels of backlash’, including social media – Facebook and Twitter are taken seriously.

Outside the organization are some serious players in helping respond to a digital crisis:

The Media: They need a comment, and they need vision/images to go with the story. As one journalist said, ‘we know that where people go first (for a breaking story) is where they tend to stay’, so they are under pressure to be first; and still right. While a company decides what to do, media will be monitoring Twitter (is there a # tag?), LinkedIn, and mainly focusing on the truth of the overall story. Media access to CEO — ‘the big chips’ — gives story bogus credibility. To get credibility: ‘If Brad and Ange use your product – get on the phone’ (and this was suggested as the best approach, with applause from all). Not every company has the Jolie-Pitts as customers, but everyone has customers, so get them out there doing the talking with you as this will help to build trust faster than any CEO can (unless you are Deborah Hersman – see this article). And don’t even think about ignoring new media – online magazines and blogs have great journalists and big followings (which, to be frank, can create another digital disaster if not managed).

WHAT DID WE ALL LEARN?

The calibre of the panel was high, but between the ‘company’ and the ‘media’, it was only the journalists who really had a grasp of crisis and reputation management in the digital world.

What was most obvious in the ‘company’ response was how insular they were, how they bunkered down in a fortress, and how little digital was used to ‘fight’ digital. With the exception of the lawyer saying that social media would be monitored, old-fashioned suggestions were put forward (a two-pager? Even the most recent future King of England was announced on email), and they were slow. It was also obvious, that for all of the business experience and smarts on the stage, no-one appeared to have any experience dealing with a reputation issue in the digital world. But to be fair to the ‘company’ panelists, they are probably, and worringly, in the majority.

Would your organisation know what to do if a damaging video or photograph hit the internet today?

This was a great session and to see the ‘experts’ put to the test was fascinating (even if a little concerning). Here are the big points: